Featured Poet: Wendy Videlock - A Moonwalk in a Cowboy Hat: An Interview by David Mason 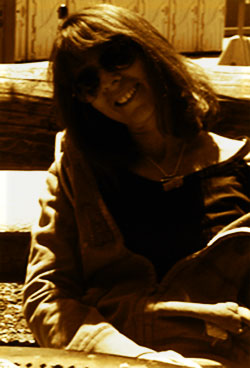 A Moonwalk in a Cowboy Hat:
An Interview by David Mason

Wendy Videlock lives in Grand Junction, Colorado, a small city flanked by dramatic mesas where the Colorado River joins the Gunnison River from the south. Known as the Western Slope, and famous for their peaches, Grand Junction and nearby Palisade are also the loci of the state’s fledgling wine industry. This is the West as you might imagine it: ranches and farms, and a community that cannot take its cultural life for granted. A visual artist as well as a writer, Videlock is grounded and transported by the place she lives so richly in.
Videlock’s first chapbook of poems, What’s That Supposed to Mean, appeared in 2010 from Exot Books, New York. By then her poems had been appearing regularly in prominent magazines, especially Poetry, and would continue to appear in The Virginia Quarterly Review, The New Criterion, The Poetry Review (England), and Quadrant (Australia), among others. Nevertheless, her first full-length collection, came out in 2011 from Able Muse Press and was a finalist for the 2012 Colorado Book Award, followed by The Dark Gnu, a book she illustrated, also from Able Muse Press in 2013.

DM: My friend, you and I are westerners, and though I’m older we’re pretty much the same generation. For me the West has offered certain silences, the presence of absences, openness, far from the madding crowd—though of course that’s changing rapidly, and I’m side-stepping the dark side of the West, the way the cult of individuality has always gotten murderous now and then. I’m thinking the West impresses itself on a poet in different ways than the East does, but I could get lost in generalizations here. I’ve been away from Colorado all summer, though, in the cooler country of my youth, so tell me how it’s been. How have you passed your days on the Western Slope? How’s the river? How’s the sky? How’s the mesa?

WV: They remain good companions. Yes, the west is home—murderous, mysterious, and bent toward consolation. My upcoming book ends on a poem called “El Alma del Oeste” (“The Soul of the West”). The landscape doesn’t just seem to inform the work, but actually gives form to the work.

DM: On your blog, The Fifth Element, I found the following statement: “It is not possible to possess a love of language without also loving silence.” Can you talk about those two loves? Where do they come from? How do they grow?

WV: Yes, silence is underrated and language overused. Where these things come from I can’t really say. My love of them probably grew in the dark, and like everything else, had to fight for some sunlight. I think it was Frost who said, “One must be a little secret in order to secrete.” This seems to be true of my nature.

DM: Ah, “The secret sits in the middle and knows.” So what drove you to write poems in the first place?