He slaps another twenty
on the billiard table’s edge
and teeters once again
upon the gambler’s narrow ledge.

All night his luck has plummeted,
though he won’t call it luck.
It’s more like there’s a muscle
or a joint that’s gotten stuck.

but the black hole of the eight ball
has a force that pulls him in.
And it’s really not a gamble
if he knows he’s going to win. 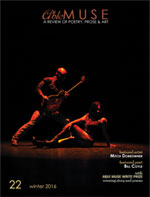