Book Review of Rhythm and Blues by David Stephenson 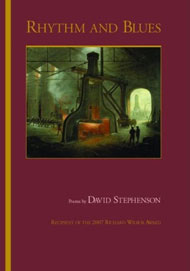 This is a book you rush through as if on oiled tracks—and before you know it the ride is over. The joy of the trip is partly due to the straightforwardness of the poems— recognizable situations, narrative and idea easily expressed, lack of complicated rhetorical devices. Except where the topic suggests a more formal diction (e.g. “Fallen Rome”), Stephenson’s language is colloquial. Best of all, we know immediately that we are dealing with an intelligent, witty, literate and thoughtful writer in whom we believe.

This collection shapes contemporary life into sonnets, strict in form or slightly varied (“Geologist”); villanelles; and most often blank verse. Where obvious rhyme might seem obtrusive to a modern ear, Stephenson for the most part manages it smoothly—not always an easy task in a traditional sonnet. The rhyme in “Computer Chess” is a case in point.  And rhyme is often an integral part of the piece, as are the couplets in “To Grendel” (a poem that, like “Fallen Rome,” has more to say about today than about a real or imagined yesterday):

How are things out on the fen?
Conditions in the world of men
Have not changed much these thousand years.
We’re still as racked by phantom fears . . .

Stephenson is particularly compelling when his Christian allusions take today’s concerns for a backdrop (or the other way around): monologues of Pilate and John the Baptist, an interview with Lazarus, a speculation about a twenty-first-century Goliath. The book contains two masterpieces about evangelism, “Riding for Jesus”—a poem about faith and a motorcycle gang:

Beneath their motto, stitched in red and gold:
Saviors M/C Riding for the Lord.

What gaunt apostle, robed, with book and staff
Emerging from what baleful wilderness
Converted them?

and the poem that ends the book—about a “Jehovah’s Witness” with “stars and rolling thunder in his mind.”

In the two middle sections of Rhythm and Blues—“Rogues’ Gallery” and “Fun House”—Stephenson moves from sonnets to more informal pieces. I’m not a toll collector or cabbie; I don’t work in a foundry or a Twinkie factory; I’m not a manager who’s firing an worker; I’m not a housebreaker. But I become each of these since—as much as the details of each job—Stephenson conveys the universal job of being human in the current world. Here’s the Everyman plight of a boss and an employee:

Firing is a skill that you can learn.
I used to use the standard boilerplate,
“First, I want to thank you for your years
Of loyal service. That’s what makes this hard.”
But when you start like that, it’s pretty clear
What’s coming next.

A neighbor wondering about promotions and pink slips at a nearby Twinkie plant pulls us between comedy and compassion:

Elsewhere a geologist’s words are more overtly sublime: “Stone is my passion.”

These poems do what poetry should—they say “what oft was thought, but ne’er so well expressed.” And some of them express what the reader may not have thought about at all: Perhaps the most compelling poem in the book is “Reflection,” which explores “a certain lawless corner of the mind” and asks a question you won’t be able to answer.