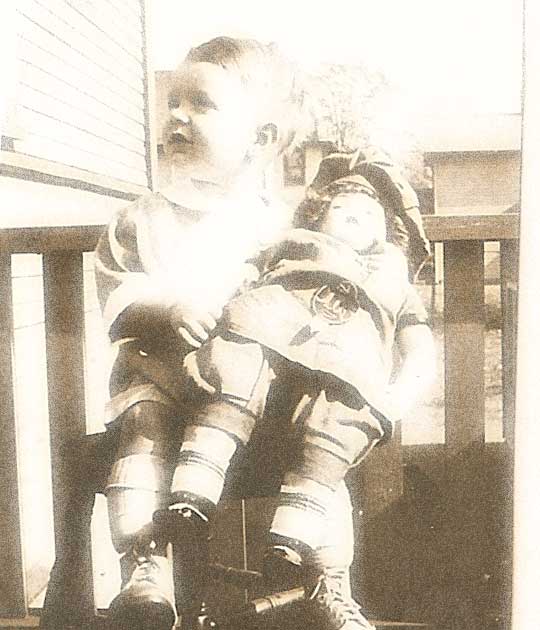 The only dirty things in his Grammy’s house were the cadets’ clothes. They arrived in bundles from the military school. He hated sorting soiled shirts and underpants. He hated the dull brown color of the limp fabric. He hated the numbers instead of names. Whenever Grammy finished pressing a uniform, she looked at the inside label and said, There you go, Mister 6470. Here you are, Captain 9632. How’s that, Private 8150? Whoever those Captains and Misters and Privates were, he hated them, too.

If Grammy found her naked, he would be in trouble. Where had he left her? He dressed Mary Jesus in clothes he made from the scraps of dresses Grammy sewed for rich ladies—dresses like the ones his mother never wore. She was a waitress at Brownie’s Cafe. Her uniform was bright white with pink piping and a nametag. The letters that spelled Peggy swirled like pink icing on a birthday cake. Pink like a peppermint drop. Pink Peppermint Mommy. Jesus Mary and Joseph that’s what his mother yelled when she was mad.

When she got home from work his mother put on trousers like ladies never wore. She went into Grammy’s back yard and pulled weeds or knocked something down. A piece of rotted fence. The old treehouse. She smoked cigarettes. Sometimes she went into the garage and banged on things. Pink Peppermint Mommy was not always a sweet piece of candy. Sometimes she smelled like brown.

Mary Jesus. He looked for her in the sewing room. He was making her a cowgirl outfit. Dale Evans wore buckskin and fringe. But Mary Jesus had a floral print because that’s what the ladies were wearing. Mary Jesus didn’t have to be like Dale Evans. She had her own style. Grammy had a piece of cardboard that she promised to fashion into a hat.

It was Grammy taught him how to sew. He pumped the treadle with his tiny feet, tensing his thigh muscles. Sometimes his little pointer, that’s what Grammy called it, would get hard. Tip the treadle. Work it back and forth. Tiptoe with a secret. Mary Jesus was smooth and hard there. When he grew up, he would find Mary Jesus and put her hair in pigtails. He would fly a plane or bust broncos or kill people. But now he just has a doll. He’s ripping out seams. Stitching things up. Over and over again.