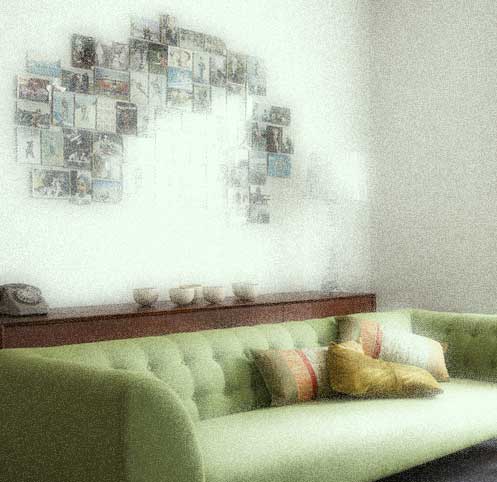 In one of the photographs my daughter runs across the yard, the baker behind her carrying a three-tiered cake. The girl is wearing white spiked platform heels and a knee length pink dress with short puffed sleeves. You can see the big white gardenia in her blonde hair. Her shoulders are hunched and her head is down as if something has been forgotten. Her seriousness makes you look the harder at the preposterous shoes.

The baker, who wears a white jacket and black-and-white checked pants, seems to struggle with the cake. It could slide from the plate, smear the front of his white jacket with white frosting. The sun shines through the brown mass of tree limbs and whitely explodes against a fence. The grass looks lush and dark green. The figures are a little blurred and the light is misty.

The blonde is not a true blonde. She will not fall in those shoes. The frosting remained on the cake. The tree, which had been unpruned for years, is half dead. The grass is the brown grass of California, where it seldom rains.

I show up in other photographs, wearing a black dress patterned with large white flowers. By accident a friend from work wore one similar. In one picture we seemed joined at the hip, ur torsos extending like the arms of the letter Y. I our hands are plastic champagne flutes and we are smiling.

Earlier I had been alone with my ex-husband in his upstairs bedroom. I was tugging on my pantyhose, which held me intact as a sausage casing. Over that I slipped the two sheer layers of chiffon that constituted my black dress with the white flowers. He had his jeans off and was shucking his heavy thighs into the loose fabric of his trousers. Like breath chiffon rasped my skin.

That morning, my daughter and her friends attached bright pink and orange Chinese lanterns to the dark green bushes and fastened butterflies made of feathers with long stiff wires to orbit the rose bushes’ effusion. They tacked pink streamers to fences and explosive pink paper bells.

When it was nearly time for the ceremony, girls were sitting all over the landing upstairs. My daughter was sitting on the bed pillow taken from my ex’s room. Her face was upturned to a young woman bending down to her, gluing on eyelashes. Coming out of the bathroom, my ex said, That’s my pillow, tugging at it until she stood angrily and let him take it.

After the ceremony I went up to him in the corner of the yard where he stood with some of his friends. Someone raised a camera and comfortably his arm slid behind my waist. I remember the slide of the layers of chiffon, the surprisingly coarse sound of it.

In photographs taken in the sunlight, with all of the young women in their dresses like candy, we seemed to have achieved something remarkable. I remember looking down from the porch above the yard, at the baker fussing with the cake, the cake set in grapeleaf shadow, its white frosting tiers bright with yellow freesia and real roses.

It was the third time in four days I'd eaten in the café on Broadway at the edge of Chinatown. A net panel with a bamboo design covered the bottom half of the window, but it was nailed up any old way, not like a real curtain. The bowl was set down and I poured on fish sauce and vinegar and shredded carrots, then stirred it with chopsticks to mix up the bean sprouts and lettuce. While eating, I scanned the personals, though the men sounded dull, or never wanted anyone older than themselves. I finished eating quickly, but couldn’t make myself leave. The waitress brought more tea with a paper napkin wrapped around the hot glass.

Screened from the street by the white lace, I watched the grannies on Broadway, their shoulders a little slumped, in their crocheted tams and cotton knit jackets and vests, clothes I see in storefronts on Stockton or Pacific. No one else in the world wears these clothes, except I imagine in Hong Kong or in China. Fabric of a dead blue or gray, a static maroon or brown patter of leaves or circles or some other small abstraction. if they are not at the produce bins or hauling babies tied crisscross to their backs, these women stand on the pavement idle as girls, and, with their straight short haircuts and small gold earrings they resemble girls, on each a pale jade bangle sliding up and down an arm to halfway encircle a dangling hand.

I went up Stockton, looking for lettuce in the markets, but only saw bok choy and some other unnamed greens. Skinny silver fish poured from big plastic bags on the ground. And oranges, apples, lotus, taro, cherimoya, water chestnuts, and pink dried shrimp like fingertips, the smell both salty and sweet. Shelves of boxes covered in red and gold paper. It was Saturday and the sidewalks were packed. The grannies pushing, five abreast on the sidewalk. Stepping from the curb, I walked in the street until I turned down Pacific. Along Grant I bought a doughnut I ate as I walked, turning down Commercial, looking into a noodle factory, where women stood around a table trailing long yellow strands.

Each night I doubled a floral quilt into a narrow, spongy layer the size of my body, banking pillows down the side next to the unused area of the bed. Cocooned, softly weighted by the quilt, in my confined space I lay flat, arms pressed to my side but elbows just bent so my forearms rested inside the curve of my pelvis, the fingertips and wrists and hands covering my pubis.

So composed, I drifted.

I’d wake cold, the quilt on the floor, the sheet bunched at my face and my feet bare against the blanket, the covers yanked away from the vacant side of the bed, the bottom sheet exposed. Because it’s California’s technical winter, the solstice near, I often wake into dark. I squint at the lighted clock face to make sure a legitimate span of hours has passed, that I don’t again have to arrange my body to finish the night.

When it’s just light, I hear men spitting. Though I’d hung a wind chime under my window, the breeze seldom reached it because I live in an alley, and the silver pipes are impotent against the chorus of throat hacking, phlegm expressed to pavement. Yet at other times there is this charm of sound.