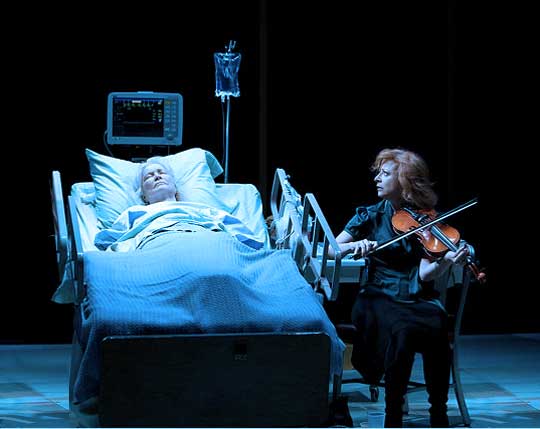 The hospital room was the size of a birdcage. Only a flimsy curtain separated me from the Russian man. His dumpy wife was visiting again, her sagging face done up in bold paint, and atop her head, a pink pillbox hat. Sure enough, the room was filling with ugly clouds of Russian.

I picked up my violin and started to play. Outside the window, I stared at the leafless black trees. Sealed shut, a matronly nurse told me: years back, a suicide. I wanted the beautiful woman who plowed her Plymouth into my car to show up. I wanted a nurse to drive a needle of morphine into my arm. I wanted to leap out the window. A moan floated by; I looked down, expecting a hole in my chest.

It was the violin. I didn’t know how to play. “Baby, what can I get you?” the beautiful woman asked when she visited the first time. She felt sorry. She had her eyes closed when we collided. I said a violin. I’d had one in my car. Not mine, it belonged to the woman who’d called to say it was over. I was on my way to return it. I’d told her she played so badly it stung my ears. Maybe that’s what ended it.

The Russians were shouting. The beautiful woman told me, “I usually don’t like where I am.” That’s why she drove with her eyes closed. Now I tried it and began to drift, feeling no longer myself but Dmitri from Brothers Karamozov, waiting for Grushenka. She’d arrive any minute in a tight-fitting dress and a fur hat.

The front door slammed. I heard someone brush snow from a coat. I called out, and there stood Ivan in the doorway, wearing a pink hat. “You can’t be saved.”

Who said I wanted salvation? Only for Grushenka to say, “Shhh,” her sugar breath on my face, then straddle me and pound my chest with her fists.

The Russians were fighting, louder. I opened my eyes just as the pillbox hat skidded on the floor. A slap. I rang the nurse’s bell, until it screeched like an angry, injured bird.

A nurse charged into the room. She told the Russians to cut it out and me to stop messing with that violin. “Sounds like someone’s dying in here.”

When they wheeled out the Russian for tests, his wife peered around the curtain. She wore her hat again, but lopsided, her cheek bright pink. Plunking herself into the chair beside me, her lower lip trembled, and I hoped to God she wouldn’t cry. She pointed to the violin. What the hell, she looked worse off than me.

She tucked it under her chin and began to play, music soaring around the room, then she got down on her knees and prayed. I felt my blood coursing through me, and I pushed myself up between the birdcage bars, so close I could see her make-up sparkling, just like my windshield, smashed on the street. I remembered thinking, how can a disaster look so beautiful?