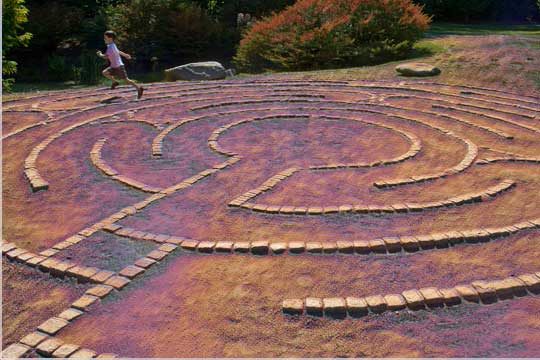 There are two black areas in the maze. Escape is impossible without them. You might as well head on into the black. You're too small to make any kind of reasoned choice between the two. A turquoise cascade crosses one and might pull you out or take you into the wall at high speed. No, I'm just making it sound bad. Escape is likely but might bring you back to where you started. It's a possibility. You may be in the ear maze, from which escape is not only possible but mandatory. It's a left ear. I'm too large, frankly, to tell where you are. From this height I can't say what black represents. Pendants of liquid, infrared iodine spot photography, a hollow filled with coal shadow? We want them to provide the entire human body for you and we want to insist on it. They're using parts instead. The left ear. Sure, we relaxed. But the ear implies escape in one of two directions: into the brain or rolling across the jaw line—both unsatisfactory. With escape mandatory we relaxed too soon. No, I'm just making it sound tense. It could be worse. A brain within a brain is okay, particularly if you're the smaller of the two. By the way, how was your Thanksgiving? Quickly...I should have filed this hours ago. I just want to repeat. On the outside you'd be spotted immediately. Believe me, it doesn't work like sound waves.