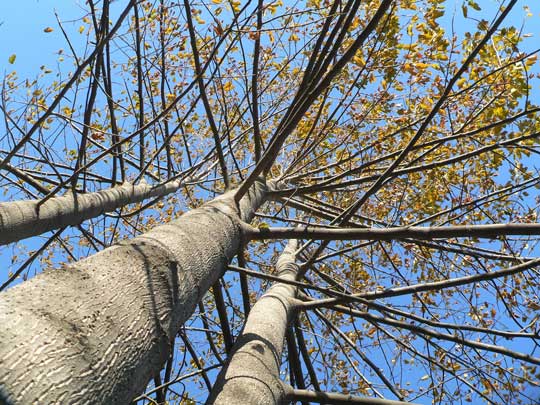 From tuliptrees to eastern hemlock groves:
we climbed until the yellow birches tangled air.
You fingertipped my palm in those coves,
and we first kissed in the bluebells, there—

But now, the tree limbs tap like metronomes.
Leaves flood our hard-packed trail, and it is lost.
White-breathed, boys hurry to their homes
when their crooked glances catch a ghost

in a frost-laced leaf that seems to form a face,
or when they hear a crackling twig behind—
but there is nothing in this place.
The ice-lined branches break or bend,

the river sometimes cracks its frozen spine.
The spring has gone, and all that could have been
has been—but the wind’s low-pitched whine
still whistles the woods as it did back then. . . .

From tuliptrees to eastern hemlock groves,
we rose until the yellow birches tangled air.
Ours was the first of many loves,
and I pass as though you are not here.