Book Review of Not For Specialists: New and Selected Poems by W.D. Snodgrass 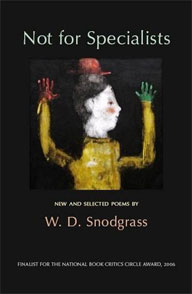 Not for Specialists: New and Selected Poems by W.D. Snodgrass, (Waywiser Press, 2009)
... more

W.D. Snodgrass: Not For Specialists: New and Selected Poems

In “Disguised as Humpty-Dumpty, W.D. Practices Tumbling” we read:

What is more odious than all
Fencesitting, straddling a wall?
Why should we back away and stall
Teetering here all day afraid of
Showing the world the stuff we’re made of?

One thing that W.D. Snodgrass has never hesitated to do, as his Not For Specialists: New and Selected Poems makes clear, is to “show the world the stuff [he’s] made of.” In the book, “Tumbling” is in the section immediately following The Fuehrer Bunker, which has as one of its epigraphs: “Mother Teresa, asked when it was she started her work for abandoned children, replied, ‘On the day I discovered I had a Hitler inside me.’” All of us, the poet implies and Mother Teresa confirms, have a Hitler inside, not excluding W.D. Snodgrass—a fraught suggestion, but an important one when he is writing dramatic monologues in the voice of Hitler, Goering, Goebbels, Speer, and other Nazis. Through intense self-examination, Snodgrass holds to the light the darkest elements not only in his nature but in ours; few of us willingly dig so deep.

However, it is not openness alone which makes Snodgrass worth reading. Commonly known as the “father of confessionalism,” he hated and abjured the term, insisting that he merely wrote poetry as it had always been written—in conversation with the tradition. Born in 1926, Snodgrass was a member of the rich generation of American poets which included Wilbur, Hecht, Merrill, Justice and Gunn; at the University of Iowa, he knew and studied with Lowell, Berryman and Jarrell. It was his influence on Lowell—specifically, that of Heart’s Needle (which won the 1960 Pulitzer Prize)—that gave rise to the term, coined by M.L. Rosenthal in a 1959 review of Life Studies. Following Snodgrass’s death in January of 2009, Not For Specialists (Waywiser, April 20091), provides a representative overview of his work, and allows Snodgrass to be read not as the progenitor of a school but as an original, varied and entertaining poet in his own right.

Though plenty of autobiography may be found in his verse, its “confessionalism” is surely the least of its virtues. The seminal “Heart’s Needle,” which explores the poet’s estrangement from his daughter during his first divorce, is not great because it contains biographical truth, but because it finds sympathetic forms in which to transmute everyday detail into organic metaphor. Take section 7:

Here in the scuffled dust
is our ground of play.
I lift you on your swing and must
shove you away,
see you return again,
drive you off again, then

stand quiet till you come.
You, though you climb
higher, farther from me, longer,
will fall back to me stronger.
Bad penny, pendulum,
you keep my constant time

to bob in blue July
where fat goldfinches fly
over the glittering, fecund
reach of our growing lands.
Once more now, this second,
I hold you in my hands.

The swing-set serves as a metaphor for the daughter’s visitations. The first stanza gives us the poet’s version of the girl’s experience: she feels him shove her away, only to return and be driven off again, in a mutually wrenching drama of perpetual dissatisfaction. (“Scuffled” aptly suggests the messy divorce lurking in the background.) The second stanza evokes the passing of time. Through verbal sleight of hand a subtle perception is made a figure for the girl’s aging: on each downward arc of the swing she comes back “stronger,” suggesting both the increased force in her fall and her growing maturity after each hiatus. Finally, in stanza three the poet’s eye drifts to the goldfinches, which fuse in a single image the girl in her flight and the season’s transitory passing. The last two lines reveal the poem as an elegy for the eternally ephemeral: for summer, childhood, and a father’s time with his daughter. The tragedy is that, as soon as the father holds what he loves, he must shove her away again; the divorce only deepens the pathos of ephemerality. The poem’s form mirrors its content; the see-sawing indentations suggest the back-and-forth motion of the swing, while the rhyme scheme in each stanza varies expressively (notice, for example, the distance between “climb / time” in stanza two, suggesting the length between visits) and the inter-stanzaic enjambments enact the leaps of thought from one stanza to the next. Like all of “Heart’s Needle,” this poem is solidly made, its subject the ancient stuff of lyric (cf. “Nothing Gold Can Stay”), its technique fully intelligible on the continuum from Philip Sidney to Robert Frost; whatever confessing it may contain is incidental to its poetry.

Aristotle claims that command of metaphor is the mark of poetic genius; it is this command (along with his formal fluency) which sets Snodgrass apart from his legions of confessionalist epigones. Again and again throughout “Heart’s Needle” we find life made metaphor: the cold war, a winter landscape, a child’s garden, Halloween candy, a museum of stuffed animals, and other props of the poem’s moment all come to figure aspects of the poet’s predicament. Nor are these virtues present only in “Heart’s Needle,” but are found scattered throughout much of his best work. The sheer number and variety of successful metaphors in Not For Specialists for ailing or failed relationships is impressive; they include a disheveled yard and slummy neighborhood, a locked house, valuable old jewelry taken to the pawn shop, a bird caught and released, and a seashell, in which “some live / Thing hungered, trembled to survive, / Mated, died.” In “The Lovers Go Fly a Kite,” from After Experience, the kite with its “bright tatters” both figures the relationship and itself is figured and refigured in a virtuosic succession of similes: at first “shuddery like a hooked fish / Or a stallion,” it morphs into a hawk, then “tugs the line they keep / Like some exquisite sting ray / Hauled from a poisonous deep / To explore the bright coasts of day.” Finally, its “sharp bones of failure hung / In all the parkway trees,” it becomes a tattered flag, a symbol of the couple’s temporary truce:

It’s enough to make you laugh—
In these uncommitted regions
On an invisible staff
To run up an allegiance!

Snodgrass excells both on the macro-level of poem-as-metaphor, and the micro-level of the metaphorical image, as “The Lovers Go Fly A Kite” illustrates. Here is another of my favorites, from “Spring Suite”:

Snarled in the grasses, wild strawberries
Shine bright as scabs where thick dark hair is,
Like fireflies or the afterspark
Of roaches lit where strange cars park.

A word of warning: let the prudish beware, since like Catullus Snodgrass can be both funny and bawdy when the mood strikes, and seems only to grow more irreverent with age. “An Envoi, Post-TURP” (Trans-Urethral Resectioning of the Prostate) offers an off-color parody of Ben Jonson (“Farewell, children of my right hand and bliss”), in the form of a valediction to the poet’s semen, which now can only be passed during urination:

Each of you, at your Health and Country Club,
Timed training laps, did pushups by the pool
Shunning each voice that cried, “Back, back you fools,
We’ll all be killed—it’s a blow job!”

However, I prefer Snodgrass’s humor that relies more on wit and wordplay than on vulgarity to amuse. One of the cleverest is “In Memory of Lost Brain Cells,” written on “receiving an honorary doctorate from Allegheny College,” in honor of those “bold, selfless neurons / Questioned and persecuted past endurance.” The poet riffs on Shakespeare and flaunts his comic timing: “Still, who would live in any times but these? / These are the days that try men’s synapses.” He continues:

We few, we happy few must bless our lot.
What difference if our old professors thought

To grant our doctorate “wouldn’t be prudent,”
We can still hope to snag one through a student.

Snodgrass’s best light verse comes from The Kinder Capers, and manages to be witty and serious at once. In poems like “The Wire Walker,” or “The Drunken Minstrel Rags His Bluegrass Lute” (an answer to Stevens’ “Man With the Blue Guitar,” despite its disingenuous folksiness), he offers a kind of ars poetica, or at least a self-defense:

I’m too coarse to make common cause
With blue stockings and their cool blue laws.

But I need dirt beneath my sky
To plink it low and plunk it high.

Whatever else may be said of them, Snodgrass’s poems are rooted in the rich, sometimes dirty, earth of human nature and his own examined life.

It is often said that good taste is the enemy of art; Picasso rails against it, and Bertolt Brecht claims that sometimes we must choose “between being a human and having good taste.” In his poems Snodgrass consistently chooses the former. I may not love every poem in Not For Specialists—for example, The Fuerher Bunker, despite exhibiting many of Snodgrass’s virtues, such as rhetorical prowess, formal ingenuity and skill with the interwoven series, lacks the metaphorical genius and, well, the poetry of his best work. While I sometimes shrink from the poems’ “coarseness,” as he puts it, I nevertheless admire their undefended openness to “the stuff [he’s] made of.” Though some may be flat and prosaic, others dry, still others tasteless and a little appalling, many are witty, exuberant, moving, or terrifying, and most imbued with a vulnerability that requires no small artistic fortitude to achieve. As he writes in “Tumbling,”

Winning’s not important; what’s
Important is to show some guts.

There is no shortage of guts in W.D. Snodgrass.

1 I do not recommend BOA Editions’ error-prone 2006 publication.

Not for Specialists review

Thanks for this fine and thoughtful review of De's last book.  He knew he wouldn't live to see it published, but he was so gratified that the revised and expanded Waywiser edition would exist.

Chris
Concise and expansive at once. I enjoyed this, but I enjoy Snodgrass and I agree about his courage.  He was a formalist brave enough to allow an end stopped rhyme.