Book Review of Her Place in These Designs by Rhina P. Espaillat 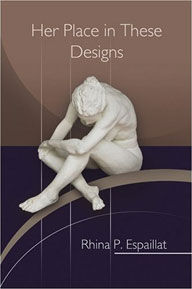 Her Place in These Designs by Rhina P. Espaillat, (Truman University Press, 2008)
... more

Rhina P. Espaillat: Her Place in These Designs

“That’s a weird cover! What are you reading, Mom?”

“Oh...It’s a new book I’m supposed to review, and it’s by one of my favorite poets. Her husband’s an artist, so I bet this cover shot is of one of his sculptures. Let me see what the back of the title page says... Yep! It’s his work.  She might even have been the model for this one.”

Long pause, as my daughters return to their craft projects, and I to my silent reading. Then, “Mom? Would you read us one of her poems?”

“Hmmm? Oh! Well, these aren’t really poems for kids, honey...but...okay, this one should be safe. It’s a sonnet about a missing crab.”

Both girls look up, riveted: “Seth’s hermit crab escaped, and his mom didn’t find it until it died, and its body started to smell like rotten fish.” “Yeah! What happened to hers?”

Not far into reading “Crab Poem” aloud, my heart sinks as I realize what a dark and complicated sonnet this really is. Far too dark and complicated for a fifth-grader and an eighth-grader to enjoy. What was I thinking? The crab has crawled “out of the tepid comfort of his tank/ into our den, out of his life’s show biz/ low comedy to his lone Grand Guignol.” I tell the girls that the Grand Guignol was a famous theater, but I refrain from mentioning that it won its fame by presenting macabre works. And I make no attempt to explain the uncomfortable theological implications of the ending: “Not easy, this belief that sparrows fall,/ that harmless clowns blunder toward doom like this,/ while heaven sees and opts to turn its back/ rather than shut a gate or switch a track/ or whisper in some ear, Look, there he is!”  The girls greet this conclusion with silence, and I give them a look that says, What did I tell you?I did warn you that this wasn’t kid stuff...

My ten-year-old says, “That’s pretty funny, calling the crab’s walking tapdancing. It does kind of sound like that when they’re on a table, or something hard. And then waving his claw, like he’s taking a curtain call...”  She demonstrates “one rosy claw flourished in jaunty thanks,” with a hammy performer’s grin plastered on her face.

My twelve-year-old chimes in, “Yeah! And that could also mean that he was just climbing up their curtains!” We all laugh. Relieved that there’s been no lasting damage to their love of literature, or to their psyches, I return to silent reading, while they continue working on their crafts.

A few minutes later, my elder daughter speaks up: “I like the way the poem goes from her being on her knees looking for the hermit crab, and not finding him, to...maybe being on her knees praying for stuff, and not getting that, either. I mean, I’m not sure I like it, but...it makes you think. It’s interesting.”

My ten-year-old solemnly pronounces, “That’s kind of brave, talking about God like that in a poem. I mean, everyone probably thinks that kind of stuff when bad things happen, but when you write it down, it’s like...out there in the world. You can’t take it back.”

To my alarm, they go on to discuss “while heaven sees and opts to turn its back/ rather than shut a gate or switch a track” in the context of the recent commuter train accident in Washington, D.C. (Yikes! They actually picked up on that!)  The older girl shakes her head: “There’s a BIG difference between wishing God would whisper to you, “Look, there he is!” when you’re looking for a hermit crab, and wishing God had stopped a gimungous train wreck from happening. Seems like the poet’s overreacting a little.”  But her sister argues, “I don’t think so. She knows that if God can do anything, then big disasters and little disasters are really the same, to Him.”

They work on in thoughtful silence.  Then, “Any other animal poems in there?”

I find and read the sonnet “Woodchuck.” When I look up at the final line, their craft projects lie forgotten in their laps. “Whoa!” says my eldest. “She had me really worried that she was going to shoot the woodchuck!  She was so mad about how long and hard she’d worked to grow those tomatoes...and then when she described the feel of the gun in her hands...” Her sister finishes the thought: “Yeah! It seemed so real that at first I didn’t know she was just...imagining the gun because she was so furious; I thought she actually had one!”

“And it was even worse because she made him sound so cute in the beginning!  Could you read that part again?” I do: “Helpless, I watch him clamber up the fence,/ balance his lumpy brown marauding weight...”  They interrupt: “See, right there? When he’s balancing at the top of the fence? That part of the poem even sounds wobbly and lumpy!”  “Yeah, it’s like you can really see him trying to stay on the fence!”  Ah, I think: Teachable moment!  I explain that the poet has intentionally knocked the iambic pentameter out of kilter at that point, by substituting a trochee where we expect an iamb. “That’s so cool!  Some people might think it’s a mistake, but it actually makes it a better poem!  Read another one!”

I hunt for more animal poems and find “Squirrel,” which begins “Look how those smallest fingers clasp together” and ends considering “whether or not heaven is fair,/ entirely deaf or not to such small prayer.” (Miss Twelve: “Huh. Prayers again, and Do They Really Matter? She sure thinks about that a lot.” Miss Ten: “Well, don’t you?”).  More page-flipping reveals an ekphrasis of a painting they know, “Portrait of Don Manuel Osorio de Zúñiga.” (“Nah, I don’t care for that poem too much. Maybe because I’ve never really liked the painting, either.”) Next, I find the five-haiku sequence of “Purim Parade” (“Aw, how cute! ‘Tyrannosaurus/ Rex clutching his mother’s hand.’”) Then another sonnet, “Parable,” because it has a bear in it. (Miss Ten: “It’s kind of creepy, how she starts out as part of the audience...and then at the end of the poem she’s the dancing bear.” Miss Twelve: “She’s not just the bear! She’s the animal keeper, too, and also still herself, in the audience! She’s everybody! That’s even weirder! Read it again!” So I do, two more times.)

The girls request another poem, but grow impatient waiting for me to find one that I think they’ll like: “Why don’t you just read us all of them, from the beginning, and we’ll tell you if we like them or not?”

I do, surreptitiously skipping now and then, but partway through “Grainy Bits” I’m forced to explain that Chaney, Goodman, and Schwerner were civil rights workers who were murdered for registering black voters in the South in 1964. I did warn you that this wasn’t kid stuff, I scold myself, and vow to be more careful with my selections. Then I turn the page and say, “And here we are at ‘Parable’ again...”  “Oh!” cries the twelve-year-old.  “Now it makes sense! The audience in ‘Parable’ is just like the hate-filled people in ‘Grainy Bits’! Or maybe they’re more like the man hurting the bear to make it dance... Hmmm. Read them both again.”

The girls deem “Trick Or Treat” and the skeleton-themed “Tenant” unacceptably scary, although they do seem to enjoy shuddering as they feel “the hard crater round each eye” with their own fingers. And many of the other poems don’t appeal to them at all—including, alas, my own favorite, “Find Work”—because these are, indeed, not poems for children. But to my surprise my daughters keep me reading for nearly an hour, requesting encores of the poems they particularly like.  (Their favorite is “The Poet’s Husband Engages in Gourmet Cooking”: “That’s so funny!  I bet her husband can’t find stuff in the kitchen because artists are right-brainers. Read it again!”)

Finally, I cry mercy because I need to give my voice a rest. My twelve-year-old takes the book from me so that she can look again at the female statue on the cover.  “$15.95?” she shrieks, scandalized.  “We could have all gone to the movies for that!”

Another teachable moment.  I explain that, alas, poetry books cost more than other books, because their press runs are smaller.

“Oh,” she says.  Long pause. “Well, I guess this one was pretty much worth it.  And we’re not even done with it yet.”

Julie, that is the best review I've ever read. And I love Rhina's book like your kids do. Thx.