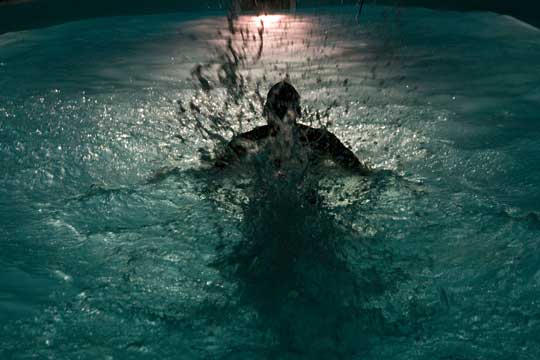 That green expanse
Is swaying long and lush beside the creek,
And there his ball’s forgotten as the child,
Unable not to shriek,
Chases the phantoms of the wind that dance
Among the stems and seedheads and runs wild.
And wind-shaped figures seem to turn
Among those willow shadows with concern.

Robed in the wave
They rode on as it arches and breaks down,
The sunbrown and half-naked swimmers dive,
As though they meant to drown
Deep in its clear interior, and brave
The downward tug exultant and alive.
What presences among the weed
Reach as the wave slides past them and recede?

Their limbs entwined
And rubied by the wine through which the lamp
Birthmarks first one and then the other skin,
The lovers linger damp
And heavily contented, with no mind
To end the mingled sense they’re drowsing in.
Behind them over wall and ceiling
The bodies of the night shades bend appealing.

Hung like auroras
Or interstellar darkness draped in space
With patterns of galactic heat and cold
Within which this takes place,
The shadow-woven and unspoken chorus
Pends at the edges, helpless to behold
The spectres of the brief lit sphere
They may not counsel and who cannot hear.