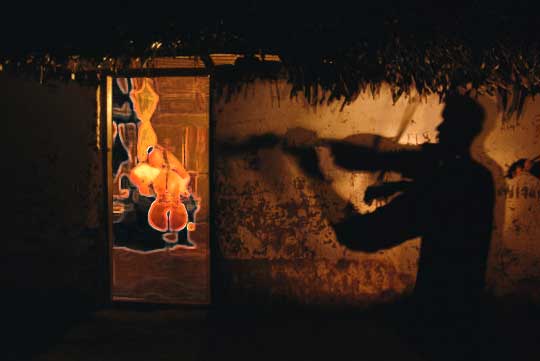 Shades gather high against the moulded ceiling
And stain the edges of the picture frames
That room by room and down the house-long halls,
From which the summer day is stealing,
Appropriate the walls
With bits of elsewhere verified by names.

As voices float in from the deck, commended
By Jake’s excited barking and the patter
Of his recurrent paws, Brucknerian chords
Have reached their climax and descended
In crafted bliss towards
A resolution that would seem to flatter

A human sensibility. But none
Attends. That rapture’s drowned out by a chorus
Of pinot-primed hilarity. Meanwhile
The disc has clicked on and begun
A piece in sharper style
To counterpoint the yearningly sonorous.

A setting conjured from Antonioni
Preoccupies the vacant tennis court.
Soon two of these four diners will have gone.
The indefatigable Sony
Has put Vivaldi on.
The other two have their whole lives to sort.

So, playing to itself, the house grows dark.
And outdoors at the table too the games
That they’ve been playing in the fading light,
Anticipating each remark
And knowing they were right,
Have darkened, and they’re calling other names.

Jake is still dashing up and down the deck,
Barking to no one. On the swimming pool
Patches of light like napkins bob around,
Impossible to grasp. The dreck
Of dinner makes no sound:
The oozing brie, the bowl of raspberry fool,

Pink innards of a fig, the soggy salad
Plastered among the trout bones, are all mute,
And lying in their nullified relations
Render all utterance invalid.
Now speechless in pursuit,
And treading flat the border of impatiens,

He follows her departure up the drive.
Inside the house, possessing this dim scene,
An eloquent piano solo quotes
Itself, though no one is alive
To those brief piercing notes,
Which say so much they never need to mean.