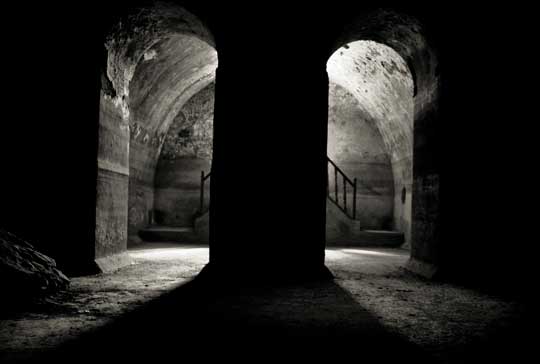 Mother and Father are sleeping. It is late. Slowly, the house shrinks into itself, pulling me into its tightness. Morocco has been on my mind lately. When I sit here thinking clearly about everything, I have the feeling I could make it to Morocco. Maybe it is time for me to go.

One suitcase. No decisions.

I look around. Mother’s furniture still matches perfectly—who would deny it is hers?—but I know that in Morocco everything will be different. Father will not be there. And just as well. He has no sense of humor.

I can see myself tiptoeing around the sharp edges of Morocco, listening to the laughter. There are no edges here. Father has chipped off the edges. He has rubbed them away, so I slip and slide sideways, falling back onto my heels, twisting over on my ankles. It is silly, but after all, Father has no sense of the ridiculous. If he did, wouldn’t he smile at the photographs?

On the walls flanking the fireplace, sturdy frames hold the photographs, pictures of yore gripping the walls like leeches. If they fall off, they will shrivel and dry into the kind of dust that works into carpeting and rots fibers. I know they are of yore because smiles are holding my eyes. I want to turn my head away, but the sunshine faces have captured me, and I must look at them.

The photographs will not want to travel to the sharp edges of Morocco. They prefer clinging to the walls, telling Infinity a lie with their smiles. I do not see laughter, but Mother tells me I am wrong. We were very happy, she says. The camera knows.

Under the lamplight the sherry glimmers its promises, but it knows nothing of plans. Mother’s plan was to make plans, and she took pictures of them. They started out in color, but they turned black and white. Father’s plans were too big for the camera’s eye. When they exploded, it was like a wave hitting a cliff, a billion pinhead drops of plans falling back into the sea of the past and the future. But for a moment they glittered, scintillas suspended in the air. When he put his hands out to grab them, they oozed through his fingers like water.

He kept his fists closed for a long time before he knew they were empty.

My sister thinks she can follow me to Morocco, but there are no true pictures of memories. The camera knows that.

Father used to snake his hands through music, but my sister laughed at the whole notes, half notes, quarter notes climbing the lines of the page, eighth notes caroming off the bars, sixteenth notes leaping into space, falling, echoing, twisting through the string of Father’s balloon dream. We saw a grace note puncture the balloon, and smithereens of dreams danced into the air to music no one could hear.

Mother followed them with the camera, but she was a traveler treading cobwebs. And Father looked for his face in the mirror, but the blur was wet.

A violin and a piano were mated a long time ago. Their silence is in the photograph of my sister and me. At the back of the picture a halo quivers like a promise about to break. Light sparks in my eyes as I look at the camera, my bow in midair. Do I see Morocco already? Is my sister smiling as she looks down at her fingers, pink curling over ivory? Where is Father? Is he smiling and waiting for our fame to glow like glory about his head? Does he hear applause, or is it waves breaking against the cliffs? He has not yet closed his fists over the emptiness.

The white teeth of smiles dot the photographs beyond the lamplight. A cobweb imprisons a shadow on the ceiling, hanging like tatters on the edges of feeling. Mother is sleeping. She will be angry to see silent threads drifting and twining in the air.

In my mouth topaz sherry shimmers over my tongue.

The room in Morocco is plain, simple, no clutter. Clean sheets every day. No dust balls conniving in silent chatter behind the door when Mother pushes into the room. No commotion anywhere about whose turn to please, to do, to be.

In Morocco no one will ask who is best. No golden rings can slip from fingertips that tremble when laughter shatters like glass.

Fathers and mothers left Morocco a long time ago, while their heads were teetering yes and no, when the question marks in their eyes kept their eyelids from closing.

My mother asks the wrong questions. My father opens his empty fists.

Morocco is too dry for tears, too far for voices to travel.

The seas are calm; everything stays in color. My sister thinks the mystery will bother me, but I wonder about the cascade of kaleidoscope bits.

My sister thinks I am angry because she died. You can tell that from the smile on her face in the family picture. We sit on our little wicker bench, and Mother and Father stand behind us. Their hands touch our shoulders. We have lace at the hem of our dresses, and Mother wears velvet. Tips of white peek out of Father’s breast pocket.

My sister curls her fingers over the edge of the bench. She thinks I can’t leave the loose threads trailing me. She thinks I am angry because she did not say goodbye.

In the back bedroom a snore curdles, then rumbles down the hall, tumbling into the living room. Now I can pull my eyes away from the photographs because the spell is broken by Father’s snore, and for once I see that he has done a good deed. I cannot tell him, for he will not believe me.

It is quiet around here now. Everything matches perfectly. I might get ready to go.

Someone is waiting for me in Morocco. His voice has the harsh angles of metal laughter, sharp like his face. When I get there, he will open a map for me.

Not everyone knows where Morocco is.