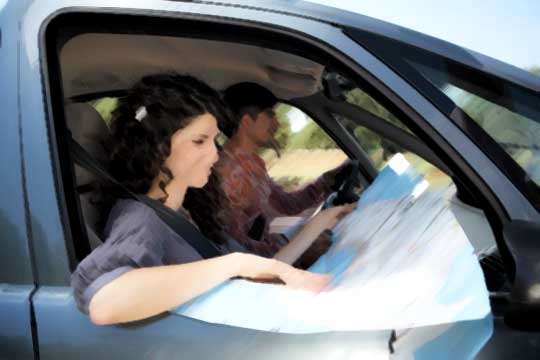 Mary Anne and Jackson were lost in that part of Miami that tourists only know about from their TV sets.  “Jesus Christ,” Jackson said.  “I should’ve known you couldn’t manage this.  All you had to do was get us from the fucking airport to your Aunt’s house.”  He looked over at her from behind the wheel, smiling in the way that said she was lucky he was being so patient.  “But that was too much for my little Mary Anne, wasn’t it?”  He shook his head, wagging it from side to side. “Wasn’t it, honey?”

Mary Anne clenched her fists around the corners of the map and looked back at her husband.

“Careful honey,” he said, pointing to the map.  “You don’t want to ruin that.  It’s your only shot at getting us out of this.”

Mary Anne was silent for a minute, then she said, “What would you like me to do.”

“What I would like you to do,,” Jackson said, “Is to function like a halfway intelligent human being.”  He turned toward her again.  “Just for once.  You think you can do that?”

They were driving down streets that seemed to get more narrow and rutted the farther they went. She looked out the window at the long, aquamarine and pink warehouses on the side of the road, at the heavy, ponderous sky, at the palm trees that seemed ready to catch whatever it decided to unleash.  Everywhere, in the corners of her frame of vision, there was movement.  Small, scurrying, secretive movement. She felt it in her body, like something soft and electrifying running up and down her arms.  We’re being watched, she thought.  This is bad. But she didn’t feel anything in connection with the thought.  It was just knowledge, it just was.

“Jesus fucking Christ,” Jackson said.  “Can you get us back to the freeway.” He gestured ahead of them, almost hitting the windshield. “It’s right there, Mary Anne.  Come on.”

But they weren’t getting back to the freeway.  On and off-ramps loomed overhead, a curling mess of concrete and asphalt.  They had been trying for at least a half hour to get to the on-ramp, and it wasn’t happening. Mary Anne looked down at the map.  It was a blur of red, green and black lines, twisting together beside the great blue expanse of the Atlantic Ocean.  “I can’t tell exactly where we are,” she muttered.  “Somewhere around here I think.”  She pointed vaguely at a section of small black lines that bordered the water.

Jackson grabbed the map, crumpled it in his fist, and threw it out the window.  He turned to Mary Anne.

“What a disappointment you are, you stupid, stupid cunt.  I never should have married you.”  He sighed and shook his head as if the inconvenience were too much for him.

“I know you are,” Jackson said.  “That’s why you’re going to get out now and find us some nice gentleman who can give us directions.”

Mary Anne looked out the window.  They were stopped now, and the movement that had previously existed in the fringes of her field of vision seemed to be moving to the center.  She saw a pair of arms and legs scuttle from behind one warehouse to the next.  And another, behind a large brown dumpster that stood next to it.

Suddenly, seemingly out of nowhere, there was a knock on Jackson’s window.   “Yo man, you lost, eh?  Your car broke?”  He was grinning and had gleaming white and gold teeth.

Jackson rolled down the window.  “We need to get to the freeway,” he said.

“My car isn’t broken—“ Jackson started, but didn’t finish.  The man’s hand reached in and grabbed Jackson around the neck.  “I’m Julio!” he said, and then he pointed behind him, where three other men were standing, hands in their loose jean pockets.  They wore sleeveless white tee-shirts which showed off their smooth brown arms.

“We gonna help you fix your car,” he said, and before Mary Anne could stop to wonder how she felt about anything at all, Jackson had disappeared out the window.  Mary Anne heard a soft thump as he hit the dirt.

Julio stared at her through the driver’s side window.  “Well, chica,” he said.  “You wan’ me to help you fix your car?”

Mary Anne looked around for a minute, as if she had all the time in the world.  There was no hurry.  Somehow she knew that.  The pale blue interior of their BMW 540i was littered with Jackson’s cigarette butts, stuffed into the ashtray, and the bags of Sun Chips and M&Ms that she had bought at the convenience store where they stopped for gas.  The motor was still running, and the air conditioner blasted cold air from the vents.  Jackson Brown’s “The Day the Music Died” played faintly from the speakers.

Julio waited patiently. Mary Anne looked at his face and in the gray afternoon light it looked somehow kind.  The car was in here.  The row of warehouses, of men with guns, probably, and packets of cocaine, god-knows-what-else were out there.  Along with the water, and a freeway somewhere nearby, and her Aunt’s house somewhere not far after that.

“No.” Mary Anne opened the passenger door and got out of the car.  She walked around to face Julio and saw that Jackson was lying on his stomach, face pressed into the dirt, grunting. One of the men sat on top of him and held his arms.

“Honey,” he said pitifully. He seemed suddenly smaller than his 6 feet 4 inches.

“No,” Mary Anne said again, and took a deep breath of wild, salty air. Everything was very clear.

“I’ll give you the car,” she said.  “It’ll make you good money on parts.” She smiled.  “You can have it.”  She turned around, looked in the direction of the freeway, and then turned back to Julio.  “And you can have my husband, too.”

Jackson made a strangled sound against the dirt.

“And you can have my credit cards –they’re all in his name –and you can have my purse.  It’s a Prada.  It’s worth at least $350 now.  And you can have my leather jacket—it’s in the trunk—and my rings—“ She wrenched them rapidly off her fingers. “I’m just keeping $20 bucks, boys, ok?”  She rummaged in her purse, pulled out a twenty, then dumped the contents of her purse onto the dirt.   While she did all of this, Mary Anne watched herself with a kind of stunned amusement, as if she were not, in point of fact, the person doing any of these things.

Julio hesitated, but she held up one finger.  “This is a good deal and you know it,” she said.  “Now:  which way to the freeway?”

Julio pointed to the left –the way they had never tried.