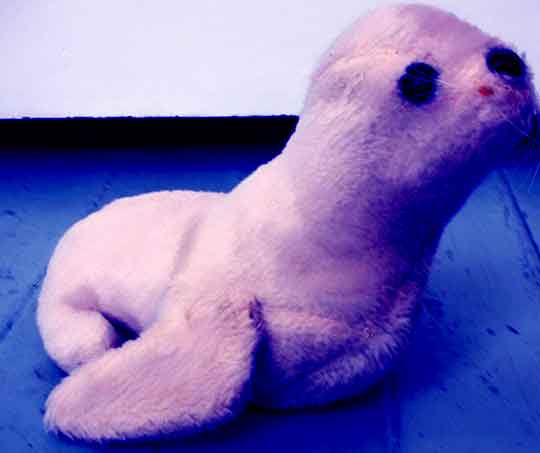 He still hasn’t talked to us yet.  It’s been about two weeks since they dropped him off.  I don’t really see him much, with school and all, I’m only really home to do homework and leave again, but I wonder about him.  Not really worry – no, I don’t tend to worry about anything – but I do wonder.

He has this seal that he drags around with him everywhere and, from the way he looks at it, I wonder if he talks to that little dirty white toy more than he talks to people.

Last night I walked up to bed around midnight.  My arms were full of chemistry books; I was walking really slowly so I wouldn’t bump something and drop them.  His door was open just a crack – he always insisted on that – and I heard noises from inside.  He was talking.

I knew it must be him because there wasn’t anyone else who could be in there at this time of night, but of course I didn’t recognize his voice.  I’d never heard it.

“I don’t want to like it here, Mike.”  He said.  I leaned against the wall, trying to get a good view of his bed through the crack without letting him see me.  “Help me not to like it.  We can talk about all the bad parts.”  I finally wedged myself against the linen closet door so that, if I squinted and twisted my head sideways, I could see him bundled in blankets against his headboard, holding that old stuffed seal in both hands.  He was frowning at it, as if listening intently. When he spoke again, I knew he was answering whatever it was that the silent creature had said.

“Yeah, they do make chicken a lot, and we don’t like chicken, do we?  And bedtime is kind of early.  And, and – “ He let out a long sigh and closed his eyes.  The way he leaned his head back against the headboard made me think of someone far older than his six years.  I slipped into my room and set my books down on my desk.  His small, serious voice kept reverberating in my head.  “I don’t want to like it here, Mike.”

“Why not?”  I whispered.  Suddenly, it was very, very important that he like it here.  I was desperate for him to love living in my house.  I turned and moved quickly across the hall.  He jumped when I was suddenly sitting on the end of his bed.  I guess I must have looked frightening, with my mascara smeared under both eyes and my hair tortured into a tangled mop after hours of fidgeting through my studies

He stared at me for a long time, hugging Mike tightly to his chest, his eyes large and searching.  “Because,” He finally whispered back, “I’m just going to leave again.”