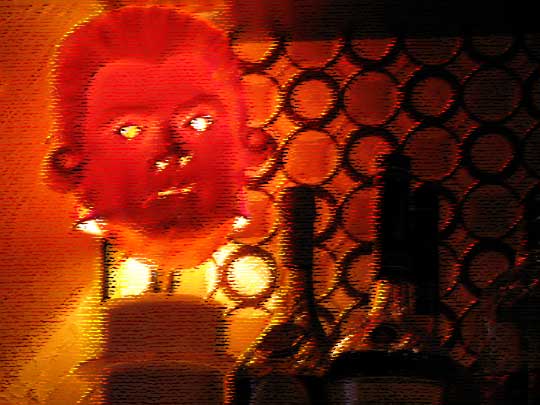 They don’t come together, but arrive outside at the same time, surprised to see each other. Inside, they sit together at a table and a waitress brings them both a beer.

“I didn’t know you were back in the area,” the man says.

They are silent for a minute. The man looks down at the table, begins peeling the label from the neck of his beer bottle, then looks back up at the woman’s face. “You know I thought about stalking you for a while,” he says, and laughs. “Thought about driving up to New Brunswick and following you around everywhere.”

She smiles and takes a sip of her beer. “For a while I thought you were stalking me.”

Now he smiles, self-consciously. He is tired, but excited now, not exactly nervous. His stomach flutters. “You mean the note?”

“What the hell was that all about?”

“I had to do something,” he says, a little too quickly.

“You could have talked to me.”

“That wasn’t working,” he says. “What would you have done?”

“What was it you wanted me to do?”

They are both silent again, drinking their beers.

After a moment she says “I didn’t want you to leave me a note under my windshield wiper. You know my father found it first?”

He cringes in the middle of a sip and is careful not to say he’s sorry. “I didn’t know.” Then he remembers. “You know I am sorry, about him. How’s your mother?”

“I sent a card,” he says, again too quickly.

He finishes his beer and motions to the waitress that he wants another. “He never liked me,” he says.

“He never really knew you.”

“And what does that say about us?”

“It was never really like that with us,” she says.

He notices her eyeing the ring on his finger.

“What does it matter?” It does matter to him. He doesn’t want to say her name out loud.

The waitress brings his beer.

He looks around the bar. They’d been here together before. When he looks back she isn’t looking at him. She hunches her shoulders, rubs her palms together and stifles a yawn. He thinks she pretends to stifle a yawn.

“Your hair’s the same.” He tries smiling at her now. “You don’t look any different.”

She doesn’t smile back. “You do look different, a little.”

They are both silent again. After they finish their beers the waitress brings them each another one.

He lets out his breath, loudly, simply to break the silence. This isn’t how he’d imagined it. “Seven years,” he says.

“Is it that long?” She takes down a gulp of beer. “And the last time I heard from you was that note. And then the card when my father died.”

“Thought it was a nice thing to do,” he says. “You were with me when mine died.”

“I wondered if you forgot that.”

“I haven’t forgotten anything,” he says.

“I noticed you didn’t write a return address on the envelope.”

“I know. I didn’t... I mean…I didn’t want to turn it into—I didn’t want it to seem like I was using it as an excuse to contact you.”

“You always over-analyzed everything,” she says.

He looks down and traces circles on the top of the table with the bottom of his beer bottle. “I didn’t want to wait around for you to contact me.” He looks up. “If I thought you could, if you had my address, then I would have waited for you to write, or show up, or something.” He looks away from her. The other tables are starting to fill, with couples, with groups of friends. “I didn’t want to do that to myself.” He barely says this aloud. He wonders if she even hears it. “Did I give up too easily?” he asks, finally.

She looks at him, longer than she has since they sat down. “You gave up.”

“I didn’t know what else I could do. I had to do something. I had to take control of it somehow.”

“How the hell would you know?” he says, and sees in her face that it hurts her. He’d meant it to hurt her.

She sits back and doesn’t say anything.

He stands, walks over to the bar and orders another beer. He wonders, if he turns around, will she still be sitting there? She’ll probably leave, he knows, but he wants to go back, to sit down with her and tell her everything. All of it. No, he wants her to come to him. Then he’ll tell her everything.

He stays with his back to her and finishes the beer. He is a little drunk, he notices. He drank too fast. For several minutes he leans on the bar, not moving. He is somewhere else.

She touches him on the shoulder, just a finger.