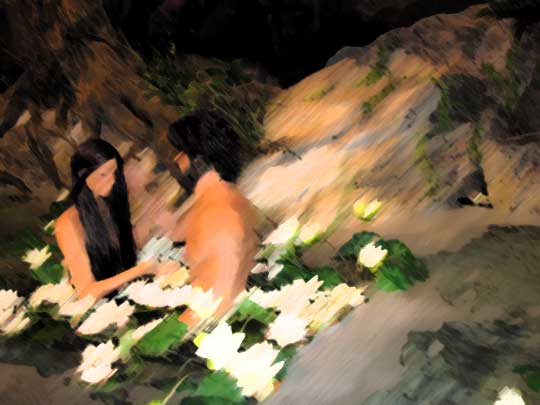 audio: The Exiles
audio of Amit Majmudar's poem, The Exiles

It sprouts out of him all trunk and no branch.
He’s soil for this tree, his farmer’s tan
The shade of soil turned. No leaf, no fruit,
No shade: Blood at the pith and blood at root.

She lowers as a fog. He makes no fuss.
What once was ichor comes out sticky pus.
Follicles bud and itch—skin irritation
From the fig leaves, probably. Constellations

Of wound hairs down there match the up there stars.
Down there: A part of them no longer part
Of them, divorced. What used to be the center,
A cellar, dank, where mere sensation enters

And turns the bottles clockwise quarter-turns,
Sediment stirred like ashes in an urn
Or sleep sloshed and settled in the tossing sleeper....
They always wait for night. God, how much deeper

They sleep now! Odd, those la la garden days
When he would mount and she would crouch, blasé
And public as the cows at noon. Flames hovered
Over a hedge and watched these lowing lovers

Go at it. Mornings they would find the topmost
Leaves singed and know that two or three had stopped close
To watch the human male and female couple.
They put on quite a show, before the apple.

Three fingers get her ready. She is never ready
Already anymore. He rubs a steady
Circle. She turns away ashamed—around
Or of him, neither knows. They make no sound

While gasping bitemarks in each other’s skin.
Counterclockwise rubs her innocent.