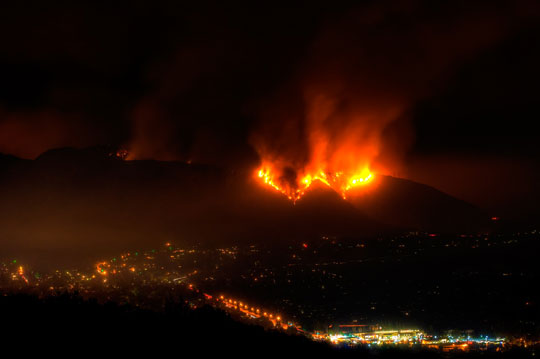 It starts with lightning, tinder, and a gust.
Smoke-jumper teams, at this stage, may contain it—
clad in Nomex, ‘chuting down to dust
they rip along the fireline like a bayonet,
swinging pulaskis, cleaving to clearings and creeks,
drip-torching back-fires, containing each hot spot
with counter-tides of flame. They know physiques
honed to sprint with gear may still be caught
by racing fronts and panic, so they pack
a thin aluminum drape, a fire-shelter.
A flare-up—now they cannot reach the black
by racing through the flame-wall, helter-skelter,
so they deploy before the terra torch
and bake like foiled potatoes in its scorch.

The crowning flames become a firestorm
as fires’ heads combine. Convection columns
shoot limbs and embers upwards where they form
flak for tanker-crews. Smoke overwhelms
visibility. They drop a Mars
and lift great lumps of lake, on every mission
seven thousand gallons salving scars
from summer’s branding-iron. Sudden fission
caused by sap expanding inside trunks
sends frissons of crackling sparks across the blaze
as fire-cracker trees explode. The thunks
of falling tops spook ground-crews. Flames find ways
to lope the overstorey under cover
of smoke while dozers doze and choppers hover.

Although we fight it, such spontaneous heat
kindles inner duff. Like Icarus
we’re drawn to flame as if it could complete
combustion of some smoldering in us,
a splendor in the trees. With rolls and dips,
like waxwings’, flying wax wings to the sun,
we soar. .. And then, as if a flash eclipse
confronts us with the dark side of the moon,
the aftermath appears: black devastation,
burnt poles which yesterday were foliaged.
Cracked pods already seed reforestation
and years will heal what fire so quickly aged
but now, devoid of even twigs and slash,
this moonscape marks where sunlight fell as ash.