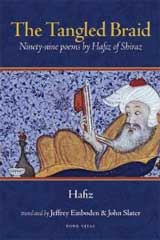 John Slater is a Cistercian monk in upstate New York where he cares for the sick and tends a quasi-Japanese garden. His poems and translations have appeared in various journals including PN Review, Canadian Literature and Crab Orchard Review. The Tangled Braid: Ninety-Nine Poems by Hafiz of Shiraz, which he co-translated with Jeffrey Einboden, was recently published by Fons Vitae. Surpassing Pleasure, a first collection of his own work, will appear in the Spring of 2011 from The Porcupine’s Quill.