Book Review of The Best Disguise by Susan McLean 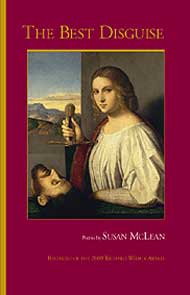 The best disguise is nakedness, McLean’s
first line asserts (if I may paraphrase).
She spends her book unpacking what that means.

Her stripped-down diction does away with screens
and ornament, for artifice betrays
the best disguise. Is nakedness McLean’s

approach or subject? Both. She gives us scenes
of mythical and modern “easy lays”;
of sex that both empowers and demeans;

of temptresses and social-pressured teens
who hide their brains with dermal-thin displays:
the best disguise is nakedness. McLean’s

revealed, as well: no filter intervenes
to shield her from her own unflinching gaze.
She shatters Beauty’s mirror, but by means

of sixty-one collected smithereens,
shows depths of Truth that dazzle and amaze.
The Best Disguise is nakedness: McLean’s.
Don’t miss this startling book, by any means.

Nearly half of the poems (28 of the 61) in Susan McLean’s The Best Disguise are sonnets. Nevertheless, its fifteen poems in repeating forms dominate my impression of her 2009 Richard Wilbur Award-winning book. That's not just a testimonial to McLean's wizardry with forms rarely used so masterfully; it's also due to the fact that patterns and variations permeate the entire collection, overflowing the borders of her eight villanelles, two kyrielles, two triolets, two roundels, and a blues piece.
I’ll limit myself to three examples of this cross-border dynamic. The command Go ask Judith in the first poem (a villanelle) becomes Go ask your Judith in the penultimate poem (a sonnet). The narrator of the dark sonnet on page 40 chooses to drink the Cabernet, to eat the cake in seeming obedience to page 30’s very light “A Little Horaceplay,” which begins:

Gather rosebuds while you may;
drink your fill of Cabernet.
Joy is wasted
if untasted:
Seize the doughnut—and the day.

Dylan Thomas’ famous villanelle tag Rage, rage against the dying of the light turns up in both the villanizio on page 38 and in the collection’s final piece, a twelve-line cento—both forms, by definition, recycling projects already. Paradoxically, the fact that some of their words are identical emphasizes the tonal and contextual differences between the paired poems.
McLean’s literal echoes often coexist with literary echoes. The three mini-mantras identified above conjure the ghosts of a Biblical heroine, the Roman poet Horace, and the author of the twentieth century’s best-known villanelle. Elsewhere in the book, two sonnets refer to the deaths of poets (Sylvia Plath and an unnamed “brilliant poet in his prime” who “died of a stroke” the day after the narrator’s friend received good news from her oncologist: . . . now I see/ where love of verse and love of persons end./ I’d say to Death, “Take Shakespeare. Leave my friend.”) Five other poems memorialize deceased friends and family members, and in their backward glances glimpse reflections of the present. Counting brief cameos along with poem-long soliloquies, McLean’s eclectic dramatis personae makes improbable cast-mates of Jane Austen and Mae West; Woody Allen and Helen of Troy; Vlad the Impaler and Lazarus; the Venerable Bede and vulnerable bawds. By persuading us of such precedents’ relevance to our own lives and attitudes, the poet turns herself and her readers into repetends, of a sort. It’s a hair-raising, but not entirely unpleasant, experience.
I mentioned the villanizio and cento as recycling projects. If the term “villanizio” seems unfamiliar, don’t bother resorting to Google—your sole hit will be McLean’s poem, as published in the online magazine Mezzo Cammin. This is because McLean herself originated the form. She was inspired by Kim Addonizio’s sonnet variant, the sonnenizio, which “opens with a line from someone else's sonnet [and] repeats a word from that line in each succeeding line of the poem".  I won’t deny you the fun of searching for the repeated word in McLean’s “Post-Parting: A Villanizio”; I’ll only add that this additional echo intensifies the recursion of an already-recursive form.
Even McLean’s non-repeating forms often have a recursive quality. The twelve-line “Figs” is a list of seven reasons—each beginning with the word because—for which I always eat them with a groan of pleasure. The sonnet “Reasons” is a similar list, but in the negative:

It isn’t simply friendship, though you were
my first and only friend. It’s not mere lust—
though when you take your shirt off, you still stir
tremors and aftershocks. It isn’t just
because you make me laugh. . .

An abrupt shift to the positive marks the turn: It has to be/ because—against all reason—you love me.  The volta of “Prime Movers” is more difficult to discern, since it doesn’t deviate from the straightforward because recipe of “Figs”; but I find that the intensity and variety of each component of this metricist’s statement of purpose more than compensates.  I’ll just quote the sestet:

Because I shaped a figure and it breathed.
Because I once was silenced by a sneer
for nineteen years. Because the silence seethed
like proofing yeast. Because I always hear
the pulse of breakers in my inland sea.
Because free verse was too constrained for me.

Note the use of enjambment and unexpected caesuras in all of the above litanies. McLean varies the wording of repetends, uses metrical substitution liberally, and occasionally surprises the reader with consonantal off-rhyme. She also sprinkles some lighter pieces among those with somber or bitter tones, providing welcome comic relief. For the most part, such strategies help McLean avoid predictability even in the midst of so much repetition.
That said, I do wish she relied a bit less on the platitudinous, endstopped X is Y structure as an opening gambit or endmove. Some selected first and last lines:

Nakedness is the best disguise.
The trick is not to say, but to suggest.
Love is a talent; you can never learn it.
Paradise is here and now.
Pursuit of pleasure is its own reward.
Self-denial is the subtlest drug.
Vanity is such a silly vice.
Losing is the only game in town.
Last of all last words spoken is goodbye.

[To be fair, McLean quotes Walter de la Mare in this last example, featured in the aforementioned cento; still, its selection shows McLean’s inordinate fondness for this structure.]
To add an X is Y statement of my own, this very minor complaint is the biggest criticism I can level. Within the context of each individual poem, I feel McLean justifies her use of these verities as introductions and conclusions; still, I have to admit that I found their cumulative effect a tad tiresome. (Perhaps some future scholar will read this and snort, “You idiot! That’s McLean’s trademark! Imagine if she had actually listened to you and stopped doing that!”)
Aside from that one small quibble, I consider this book a tour de force, and I particularly recommend McLean’s villanelles to anyone interested in the possibilities of that form. Regulars of Eratosphere, Able Muse’s online poetry workshop, will recognize “The Monster’s Mother” (p. 56) from the 2009 Deck the Halls event, in which it took second place in a very strong field. Too often, a villanelle resembles a wall—a thing of flatness, yielding ever-weakening echoes while impeding forward progress. A McLean villanelle is more like a whirlpool, whose crescendo of intensity sucks readers in and transports them to deeper levels of meaning or emotion. I look forward to seeing McLean’s influence on other poets who read The Best Disguise.

________
Reviewer's Note: It has belatedly come to my attention that McLean is properly pronounced McLane, thus making my villanelle an exercise in sight-rhyme. Just setting the record straight.