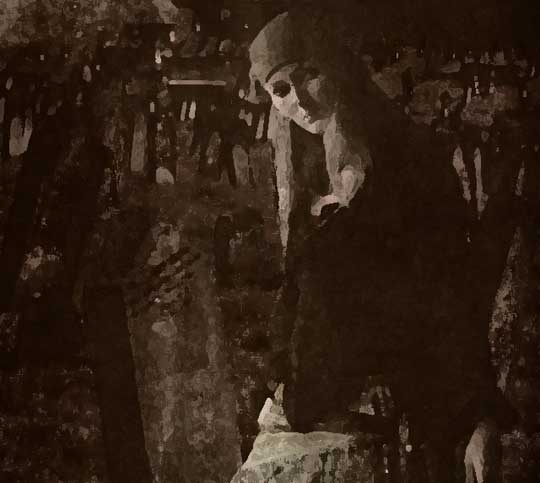 What happened in the days between that night and Friday was an inescapable babel. The creaking of unsteady trees, the strange thump of a heartbeat, and of course, the fur shrouded racket night after night after night. Ramón contemplated going to his cousin’s house, the one who had a vineyard and wife in Fuente Vaqueros. However, the thought of hearing them talk about family in between sucking on pig bones made him wait until Thursday, when he would need wine. Ramón busied himself during the days shopping for Loli, something Gloria never allowed him to do. He bought aged sheep cheese, loaves of pan de pueblo, slabs of salmon, and a chocolate tart with tiny glazed pears sprinkled on top, which he imagined in her mouth on her tongue, between her dark lips. He bought a new shirt, a new pair of socks, and a new aftershave. He got a haircut. On Thursday morning he rang his cousin, brushed his freshly trimmed hair and drove to the vineyard.
“This for Gloria?” his cousin asked, as he led him to the back of his wine cellar.
“No, someone else,” Ramón said, marveling at the hundreds and hundreds of green bottles, some without labels, sitting, waiting to be opened.
“Always thought she was a nice girl. Real pretty.”
Ramón fluttered his fingers at the bottles. “What wine goes best with salmon?”
His cousin pursed his lips, let his eyes roam, and reached for one with a clean, white label that read: Familia Camomila. “This is good,” he said. “It’s a Tempranillo, a 2004.”
“Can I have more than one?” Ramón asked, stretching out his hand.
His cousin scratched his beard, tilted his head to the side. “You doing all right, hombre? The wife asked me to ask you.”
“I’m fine. Great.” Ramón puffed out his chest, straightened his spine. “I have a date tonight, don’t I?”
His cousin shrugged, and handed him two more bottles. “Yeah, but you were with Gloria for five years. That’s a long time.”
“Thanks for the wine, tío. I owe you,” said Ramón, and took out his car keys.