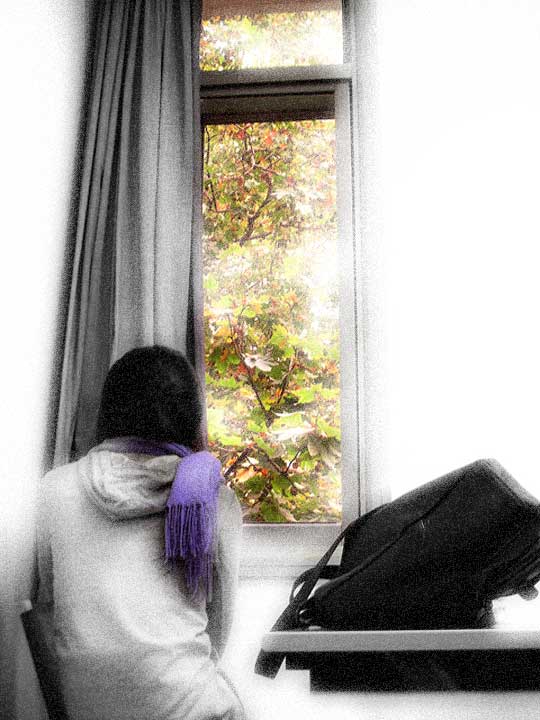 In the afternoon sun, fallen leaves moist from a soft morning rainfall were strewn across the sidewalk like embers.  It was a breezy October day, and I was walking home from school.  Father was in New York during the week now.  In his absence, it was as if our home suddenly had a large hole in the center and Mother and I had to walk gingerly around its periphery.  We were surprised, as we didn’t realize how much of a part he had played in holding the three of us together. So we occupied ourselves with other things, things that led us away from that dark, unseen hole.
Mother had enrolled in a course in art history at the art museum, a seminar on Rembrandt, and said she would apply for graduate credit.  She studied more now, and I’d often find her in the middle of the night in the small study at the back of our home wrapped in her velvet green bathrobe, hunched over the typewriter, as she punched the keys.  She would be sleepy but determined. A half-filled cup of tea would be on her desk.   I’d stand behind her and watch, but she’d never turn her head to look at me, she’d keep typing. After a while she’d lift her chin just a bit, she wouldn’t turn round, but she would stop typing. Clacking a red-painted fingernail against one key, she’d say, “Jocelyn, it’s time now to go to bed.” Fearful of disturbing her, I’d tiptoe out of the room, and she wouldn’t resume typing until I was halfway down the hallway. Mother put her whole self into writing these papers.  When she held one of the papers she had been working on in her hand, it was as if it was a part of her body, another limb.  Slowly, I had begun to see a change in Mother; she seemed less critical than when Father was at home, less questioning of my whereabouts, but at the same time she was more affectionate towards me, more so than she had  been in the past.
Mother had recently given me a key to our home because she had been spending more time at the library studying and researching for her course, and she could not predict when she’d be there.  When I reached home, I first rang the bell, and when no one answered I used the key to let myself in. I went directly into the study at the back of my home do to my homework.  It was the smallest room in our home, one that I never derived any comfort from.  I believe a print of Gauguin’s masterpiece was hanging on the wall that day.  I found Mother’s papers scattered across the top of the desk.  The title of the paper was difficult to read because it was dark in this tiny study; there was only one window facing the backyard.
I had a math paper, some word problems to work on, and I needed more light to see the numbers on the sheet.  Before I sat down to do my work, I put Mother’s papers in the top drawer of the desk, and went over to the venetian blinds to open them, allowing the strong autumn light to enter the room.  From where I stood I could fully view our backyard—there was Mother sitting under the maple tree, the leaves on the tree and on the ground were a deep red color.  Her crossed ankles were hidden beneath her dark green billowy skirt; the buttons on her burgundy blouse were undone.  At that moment a strong breeze blew opening her shirt, fully revealing her small breasts. I stuck my fist inside my mouth to prevent myself from crying out. She was not alone.  Mr. Martaine, the painter from Canada who taught at Pierson Academy, was standing not very far from Mother holding a large pad of paper in one hand, a low-burning cigarette between two fingers, his other hand was moving quickly across the sheet.  He sketched freely, apparently unmoved by the sight of Mother’s breasts, yet when his head was down and he was concentrating on his sketching, his expression was earnest. The blinds snapped shut, yanking the window cord with my free hand. I kept my fist in my mouth as I ran upstairs and into my bedroom, locked the door, got into bed, under the covers.  As I lay there I kept replaying in my mind Mother’s calm, steady expression, her small breasts, Mr. Martaine’s impartial, sweeping glance, the quick movement of his hand as he sketched.  And at that moment I wished the maple tree had not been so close, so easy to view from where I stood.  It was as if I was looking between the slats through binoculars,  and  mother and Mr. Martaine were unnaturally close to me, every detail of their being exposed, enlarged by the strong lens. Though my mind was racing, my heart thumping beyond my control, I remained quiet and still beneath the covers, as if any movement on my part would draw attention to my whereabouts.
Soon I heard them opening the back door, walk into the kitchen, their voices low, weary-sounding.  I blocked my ears because I didn’t want to know what they were saying to one another.  I lay in bed with my eyes tightly closed, imagined Mother insisting that he stay, her expression pleading, her hair falling down past her shoulders, her blouse opening. I pressed my hands even more firmly against my ears, and held still in this position, yearning to be rolling in the leaves.