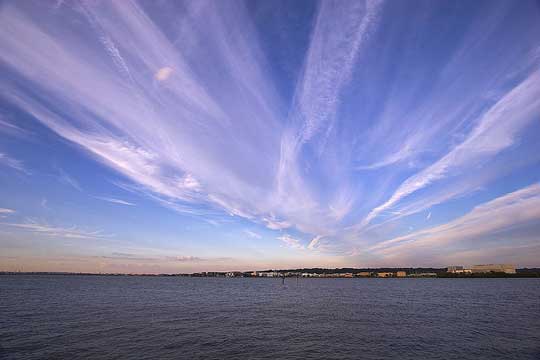 An eagle rides the thermals for a time,
Encircling an invisible sublime
Or turning in a random, slow descent—
Then plunges to a place where light is bent
By currents thick with both life and debris,
Emerging from the corner of a V
With talons holding fast a fingerling,
Which draws by sight or scent, as by a string,
From trashcan, monument and splintered dock
Wide-scattered gulls into a moment’s flock
Until they take the prey or make it fall
Into its native water, lost to all.

Each bird, as it is shaped, pursues its ends.
Upon their flights and nothing else depends
The battle, yet one watching from the ground
According to his nature, too, is bound—
In vain—to take a side, then justify
The choice, pretending that his tastes supply
A judgment representing higher laws
Than those administered by beaks and claws.

Seen in this light, gulls live on every food
Where garbage-heaps sustain their multitude
While, in a narrow niche, the raptor needs
Live flesh—and may be poisoned, as it feeds,
By substances first spread to raise the yields
Of row crops grown for feed in upstream fields.

The outcome still unknown, one wants to stay
And cheer in silence for the bird of prey.